Can Smoking Weed Cause Hair Loss [Marijuana And Hair Loss]

Hair loss has been proven to come as a result of many factors, but can smoking weed cause hair loss? What exactly is the relationship between marijuana and hair loss?

In this article, we’ll reveal to you everything you need to know about weed and hair loss according to the various scientific studies about the topic.

For most people, when they notice any sign of hair loss or thinning hair, the first thing they do is try and figure out lifestyle factors that might be the cause.

Obviously, genetic factors play a major role in most types of hair loss, but environmental factors can equally worsen or reduce it.

And if you regularly smoke weed, you might be wondering if there’s really any connection between cannabis and hair loss.

So let’s quickly look at some evidence.

Can Smoking Weed Cause Hair Loss?

It might interest you to know that two-thirds of Americans witness some level of hair loss by the time they are 35 years old.

Also, according to American Hair Loss:

About 85% of American men also have significant hair thinning by the time they are age 50.

Hair loss continues to be a global concern as more people continually find themselves on the list of persons with one form of baldness or the other. A lot of people who suffer from hair loss are also said to be unhappy with their situations.

Though quite a number of hair loss cases have been traced to androgen effects, the actual cause of other forms of hair loss remains a puzzle as some are seen as probable causes.

However, one culprit that has been identified for centuries is smoking. But what type of smoking is capable of causing hair loss?

Studies have shown that cigarette smoking can cause hair loss just like smoking of marijuana. But are these studies conclusive? Can we depend on them to say that loss of hair is a product of tobacco and weed smoking?

Well, we shall look into each of the theories put forward by the researchers and see how they are linked to hair loss.

Does smoking marijuana cause hair loss?

Researchers at the University of Amsterdam stated that constant smoking of cannabis directly contributes to hair loss.

Weed is the most commonly used illegal drug in the world and is used by over 2 million people in the UK alone, in spite of the many obvious negative side effects.

A study carried out on men and woman between the age of 18 and 60 who regularly smokes marijuana discovered that:


Young males, in particular, were susceptible to the effects of constant smoking and hair loss is one of them.

That said, if we think about it theoretically for a second, the connection between marijuana, green, gear, skunk – whatever you wish to call it – and hair loss makes sense, and can be deduced via previous studies.

Constant use of cannabis harms the body in 2 different ways – through the effect of the substance itself and through negative lifestyle changes, such as poor dietary intake, irregular eating habits, and increased stress levels.

Now, with the recent legalization of cannabis in many states in the US, we can all conclude that weed is here to stay. And while most people no longer see marijuana as a bad thing, there are still some serious health concerns about the harmful effects of cannabis.

On the contrary, lots of health benefits from cannabis use have also been recognized. From cancer to glaucoma, the range of illnesses this ancient herb can lessen is enormous and growing.

So, could these therapeutic properties really be good for human hair? Or does cannabis cause hair loss?

If you smoke weed, you are at a higher risk of losing your precious hairs as studies have shown that smoking weed causes hair loss.

I know that your question would be how can smoking weed cause hair loss? We will try to explain this based on a number of studies conducted in that line.

You know very well that most of the body functions are regulated by hormones. A recent study NCBI revealed that “smoking weed could lessen the amount of LH as well as FSH levels of the body.”

As you may already have known, these two hormones play a significant role in producing testosterone.

When there is a reduction of the hormones, this also results in a lower level of testosterone in the body.

It is, however, possible that prolonged use of marijuana can lead to fewer symptoms and stabilization in the level of the affected hormones.

This happens as the body develops tolerance but that is not to say that chronic use of marijuana prevents the aforementioned symptoms.

The body produces the hormone, cortisol in response to stress (whether physical or mental). Tetrahydrocannabinol (THC) is capable of increasing the cortisol level in the body.

With the increase in cortisol level, this can trigger a condition referred to as telogen effluvium.

Usually, the growth of hair takes place in three phases – anagen, catagen, and telogen. When the hair follicles prematurely enter the telogen phase, it is referred to as telogen effluvium. This can be triggered by illness, injury, stress or hormonal changes.

This can usually result in the excessive shedding of hair. The good news for people who suffer from telogen effluvium is that it is not a permanent condition; it goes off once the stress is taken off. But if the THC is not discontinued, the telogen effluvium remains.

3. It slows down cell production

The production of new cells is critical as far as the hair growth cycle is concerned. The development of cells is a crucial component of the anagen phase.

A 2007 research performed by the University of Debrecen showed that endo- and exocannabinoids hinder hair follicle growth in humans.

Cannabinoid receptors are found in different parts of the body and play some roles in various physiological processes including pain sensation, memory, appetite, and mood. 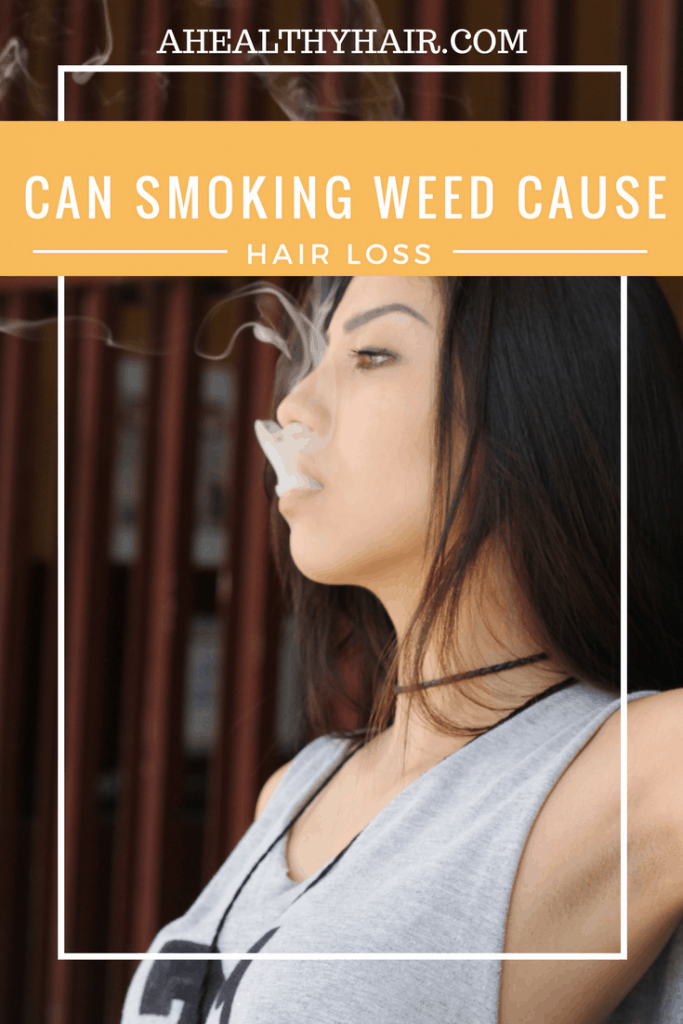 The body has the ability to secrete its own cannabinoids, referred to as endocannabinoids. But the type of cannabinoid that marijuana produces is known to as exocannabinoid.

Just like the endocannabinoid, the exocannabinoid can attach itself to the cannabinoid receptors found in the body.

The research also showed that “the prototypic endocannabinoid, AEA (which the human HF can also produce), and the exocannabinoid, THC, both slow down the elongation of the human hair shaft and stimulate apoptosis-driven HF involution (catagen) in vitro.”

In other words, cannabinoids have the power to hinder hair shaft development and growth and also stimulate the loss of hair in humans.

Weed smoking is not the only type of smoking capable of causing hair loss, tobacco smoking also does.

A report by the US National Library of Medicine shows that tobacco does not only create a significant number of deaths in the general population but also causes unpleasant effects on the skin.

The report further said that some studies had shown a link between smoking and baldness. But how does that happen?

The mechanism behind smoking leading to hair loss is made up of several factors. It is highly believed that genotoxicants from smoke can damage the DNA of the hair follicle.

It is also thought that smoke can alter the microvasculature of the dermal hair papilla. During the growth phase of hair, smoke can cause an imbalance in the follicular protease/antiprotease systems which are in charge of remodeling the tissue.

Another way smoking causes hair loss is through the pro-oxidant effects of smoking which bring about the release pro-inflammatory cytokines thereby causing micro-inflammation of the follicles and fibrosis.

There is also the issue of increased oestradiol hydroxylation and slow down of the enzyme aromatase thereby leading to a state of hypo-estrogen.

However, some research shows that the incidence of hair in cigarette smokers is made higher if the person has a family history of baldness. But smoking up to 20 sticks of cigarette per day increases the chances of becoming bald.

How to Fight Marijuana-Linked Hair Loss

If you think that your thinning hair has something to do with marijuana use, here are some things you can do to curtail the problem or eliminate it entirely.

An increased appetite is a common side effect of Tetrahydrocannabinol (THC) intake.

Unfortunately, this increase in appetite does not always correlate to an increased intake of healthy, nutritional diets. Instead, most people are more likely to find themselves feeding on carbs and sugary junks.

This can have an adverse effect on your body, and can also lead to even more hair loss.

However, you can fight this by increasing your intake of nutrition-rich foods and making sure that your body gets the vitamins and minerals it really needs.

One of the easy ways you can increase nutritional intake is to eat more fruits and vegetables.

You usually eat either alkaline or acidic foods. And when you eat more acidic foods, it affects your body’s pH balance negatively, which can lead to excess production of DHT or other side effects that cause hair loss.

>Here are some foods that stimulate hair growth.

While stopping marijuana consumption entirely may bring more good results, lots of users are cautious of doing so, especially if you’re using weed for medicinal purposes.

While THC undoubtedly has some benefits, the medicine comes with a number of ill effects, such as an increased risk of cancers and other related illnesses.

Therefore, it’s of utmost importance that you minimize your marijuana intake if you really want your hair loss issue to stop.

Determine the Real Cause

While it’s now obvious that smoking weed can cause hair loss in some people, it may not be the only factor that causes the problem.

From medication to genetic predisposition to chronic illness, hair loss has many causes. If you’ve smoked weed previously with no ill effect, or if you think it’s only contributing a little amount to your balding problem, then it will be better to identify and treat the main cause.

Now, one of the easiest ways you can do this is by the elimination of diet, which means to dismiss food triggers.

Ideally, you get rid of the “usual suspects” for about 23 days. This means no alcohol, no soy, no gluten, no dairy, egg, and no fast food for 23-days.

After this, you introduce the foods again one after the other over a period of 96 hours.

For instance, reintroduce gluten into your diet on the 24th day.

Eat it, and pay attention to the way you react within the next 48-hours.

Take the food again, and still take note of your reaction. If you didn’t notice any reactions (such as itching, rashes, hives, digestive upset, etc.) then you may reintroduce it fully into your diet.

However, you may find out that some foods leave you feeling lazy, which can be an autoimmune response, and may mean that the food triggers your hair loss.

There are many other factors that can cause hair loss such as hormonal, and some other underlying conditions. I recommend you consult with your physician to fully identify your true cause.

If you love to have hairs that keep growing and maintain its sheen, it is advisable to keep off weed smoking as it is capable of slowing down hair shaft growth as well as increasing loss of hair.

Since hair loss can potentially reduce your self-esteem, one good way to maintain your self-esteem is to stop smoking weed and tobacco. They easily produce unpleasant results on your hair.

3shares
We use cookies to ensure that we give you the best experience on our website. If you continue to use this site we will assume that you are happy with it.Ok